Working against many pressures, financial, personal and even political, the young Marconi faced scorn and sometimes even derision from the established scientific community. He fought the vagaries of the British weather, industrial espionage, fraud, blackmail, theft, Post Office and government interference and showed that it was possible to build a reliable system of communication using wireless waves.

The most amazing thing of all was that Marconi built the world’s first permanent wireless station on the Isle of Wight and later, at Niton, he made the breakthroughs in tuning technology that would change the world forever.

In November 1897, the young Italian and his small team of engineers took up the offer of rooms for rent at the Royal Needles Hotel on the cliff top overlooking Alum Bay. It was out of season and Guglielmo Marconi’s proposal to live in and experiment from the hotel over the winter months was readily welcomed by the hotel proprietors. For the next two and a half years the world’s first permanent wireless station would be operated from the hotel and its grounds.

Marconi also set a precedent with his Alum Bay Station, insisting that there was always a convenient hotel to accommodate himself and his staff near any of his Company’s wireless stations.  Marconi loved the Isle of Wight and the South Coast of England and was to return many times throughout his life. A keen cyclist, Marconi spent much of his limited spare time exploring the beauty of the West Wight and he developed a deep affection for its heritage, natural beauty and landscape.

The Alum Bay site was ideal for Marconi’s experiments as it provided a length of open water across to the mainland roughly equal to the best range his equipment had so far reliably achieved. Now it was time to concentrate on testing his equipment at sea and as a means of communication between ships and the shore. In 1897 the site was also reasonably remote from large centres of population, where electrical interference, especially from tramways had already started to become a problem. At the Royal Needles Hotel, through constant experiments Marconi and his team developed a perfected the new science of radio – testing hundreds of types of aerials, detectors and conducting thousands of trials. Marconi used the Needles as his base of operation for many crucial experiments including crossing the English Channel. But when the proprietor of the Royal Needles Hotel, William Berkeley asked for another £1 a week in rent, Marconi started looking for somewhere cheaper.

In any case by the end of 1899 the ranges that Marconi could now guarantee for his equipment had increased so much that the open sea space available from Alum Bay was inadequate for further useful experiments. He also needed a private facility where his new tuneable equipment and his jiggers could be tested away from prying eyes.

As the turn of the century drew near, to the outside world it looked as if the advance of wireless communication was unstoppable. Marconi was internationally famous and each day seemed to bring fresh news of another successful trial or a world first. The Company had grown significantly and now had manufacturing facilities in a converted warehouse in Hall Street, Chelmsford, the first factory in the world to build wireless apparatus.

Marconi rapidly surveyed the whole coast of the island, and concluded that St. Catherine’s Point, on the southern‑most tip of the Isle of Wight would be the site of his new permanent wireless station. The location chosen was an empty cottage at Knowles Farm, near the village of Niton and next to St. Catherine’s Lighthouse. The station became known as the Niton wireless station.

Marconi took up rooms for himself and two engineers at the nearby Royal Sandrock Hotel. Marconi’s system was now reliably producing long ranges, but his detractors still openly maligned Marconi’s wireless system for not being able to pass secret messages, or select a single signal if there were many present.

Working in secrecy at Niton and the Haven Hotel in Bournemouth, Marconi successfully designed his first selectively tuned transmitting equipment. This had always been the Holy Grail of wireless telegraphy development, to create transmitters and receivers that could operate at a single, well defined frequency.

At Niton the problem of tuning had been solved, and two major worries eliminated at one stroke, for the radiated power was no longer dissipating over a very broad band and consequently reliable ranges suddenly improved considerably. Perhaps even more important, adjacent stations could now conduct their business without interfering with each other.

This was a moment in history when the world changed. It happened here on the Isle of Wight, birthplace of radio.

The IOWRS wish to thank Tim Wander G6GUX author of Marconi on the Isle of Wight who wrote this article for us and supplied the photographs.

Visit Tim’s Marconi website where you can see the many books he has written about Marconi and the Island. 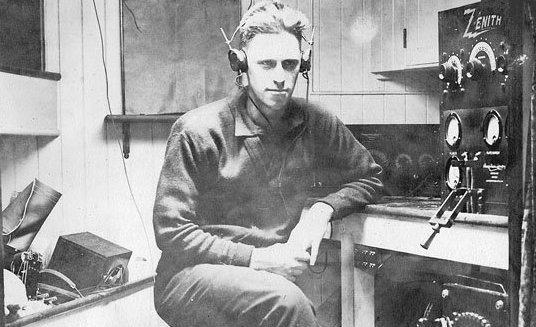